Too many academic historians are reluctant to accept that the catastrophic experiences of California Indians during the 19th century meet United Nations legal standards of genocide: “acts committed with intent to destroy, in whole or in part, a national, ethnic, racial or religious group.”

Benjamin Madley, an Assistant Professor of History at UCLA, responds to this challenge as a prosecutor might, building his case on a mountain of evidence until the verdict is undeniable: what happened in California from 1846 to 1873 was a genocide “more lethal and sustained than anywhere else in the United States or its colonial antecedents.” By 1880, the Native population had declined by more than 90 percent since the first Europeans arrived in the region. 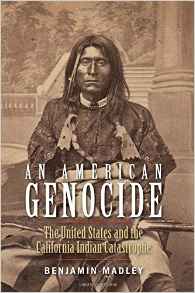 You need a strong stomach to get through Madley’s An American Genocide: The United States and the California Indian Catastrophe, 1846-1873, as it relentlessly excavates atrocities and cruelties from the historical record, piling high the corpses until we are compelled to witness how the past bleeds into the present. For doubters, more than one-third of the book consists of appendices that document every known massacre and military expedition against California Indians. Madley’s extraordinarily comprehensive research leaves no source unexplored: state and federal archives, legislative reports, memoirs and manuscripts, and library collections. This is the definitive account of California’s genocide on which all future studies will be based. It’s an impressive first book by a young scholar.

Keeping an open and optimistic heart about human nature while reading this book requires considerable effort. A genocide is not carried out secretly in the night by rogue elements, nor is it a reversion to or carryover from an earlier age. Rather it’s a modern, highly bureaucratic operation that requires time, planning, organization, popular mobilizations, and a rationale that enables perpetrators to feel that they are engaged in a righteous defense of civilization.

Madley persuasively illustrates how California’s best and brightest government officials, legislators, political leaders, judges, and businessmen were active and enthusiastic architects of genocide. Governors authorized 24 state militias to operate as a “killing machine”; and when militias ended their involvement in the slaughter, the U.S. Army became a “major killing force.” Lawmakers transformed California Indians into easy targets by reducing them to rightless subjects; made the prosecution of anti-Indian crimes almost impossible; and refused to ratify federal treaties. And the legislature colluded with landowners and ranchers to sell thousands of surviving California Indians into “state-sponsored servitude.”

An American Genocide sets the record straight on the perpetrators who engaged in “direct killing.” But there’s a great deal more work to be done. “That California Indians survived is remarkable,” briefly notes Madley in his conclusion, but the full story of guerilla warfare, strategies of resistance and endurance, and political-legal struggles by California Indians remains to be written.

Moreover, I wonder if Madley’s chronology is too constricted. He starts his narrative in 1846 when U.S. warships enter Monterey Bay and took the region from Mexico; and ends in 1873 when official “killing campaigns that targeted California Indians…had finally come to a close.” While Madley recognizes what happened prior to American colonization under Spanish, Russian, and Mexican rule as “harrowing and catastrophic,” he sees this period as a prelude to genocide. Here, at least implicitly, he endorses the widely held view that attributes the decline of California Indians under Spanish and Mexican rule to diseases that shredded Native immune systems throughout the Americas; and the decline under American rule to human agency and policies of extermination.

I prefer to understand the epidemic of premature death resulting from disease and malice as interrelated, just as Holocaust scholars regard the estimated 20 percent of Jews who died in the camps from malnutrition and exhaustion as victims of genocide. No doubt Spanish and American colonialisms had their own particular regimes of domination, but I take the long view that the period from the mid-18th to late-19th centuries is interconnected, and part of what historian Tom Bender calls the “violent process of nation-making.”

Also, I would extend California’s genocide beyond 1873 through the 20th century. The officially sanctioned killing expeditions may have ended, but social death persisted: land grabs, economic and sexual exploitation, efforts at cultural annihilation through boarding schools, desecration of tens of thousands of grave sites, plundering of artifacts, and perpetuation of myths about “disappearing Indians” and racial inferiority. Unlike the leaders of the Nazi regime who were defeated at the end of World War II and convicted in Nuremberg, the leaders of California’s genocide were rewarded for their crimes, enshrined as founding fathers, and applauded for bringing Progress to the Golden State.

The book’s conclusion is well known: “Genocidal acts perpetrated against California Indians indicate a broad-base, state-supported project aimed at their physical annihilation.” This knowledge has been passed on orally for many generations. And others have dared to write truth to power. Theodora Kroeber and Robert Heizer’s popular Sierra Club book, Almost Ancestor’s:  The First Californians, published in 1968, asserted that efforts to “wipe out a whole culture” happened here as well as over there. In 1978, Byron Nelson Jr.’s Our Home Forever: The Hupa Indians of Northern California documented how the Hupa experienced “a kind of violence the area had never known.” And a year later, Jack Norton’s pointedly titled book, Genocide in Northwestern California: When Our Worlds Cried, included the full text of the United Nations Genocide Convention.

Yet, we very much need this book. Not only is it the first thoroughly documented and vetted account of California’s genocide, it also will make it much harder for deniers and amnesiacs to dominate the state’s public history. Until very recently, popular histories of California continued to erase the state’s legacy of crimes against humanity. In 2012, when I attended the 3rd Global Conference on Genocide in San Francisco, during three days of panels and presentations my talk was the only one that included California as a site of genocide.

Well into the 20th century, architects of the California Story built a cultural firewall that insulated generations of young people from the horrors of the bloody past. Instead, students were drilled in a catechism that portrayed Native peoples as biologically inferior, racially different, predestined to extinction, complicit in their own demise, and in need of the firm hand of civilizing institutions. A widely used, state-authorized textbook for elementary schools (William White’s Our California, 2006) sidesteps the challenge of teaching the history of genocide by pretending it never happened. In the 7th grade, when The Diary of Anne Frank is typically taught, it is the rare teacher who makes a connection between Nazi Germany’s Holocaust and California’s catastrophe. Out of curriculum, out of mind.

Not surprisingly, public history echoes public education’s amnesia. There are no plaques or markers along the state’s Redwood Highway inviting tourists and locals to consider the thousands of Native people who lost their lives and their homelands, then had their artifacts pillaged by museums and ancestors dug up by universities in the name of pseudo-science. We are not expected to grapple with reconciling places of extraordinary beauty with the unspeakable horrors of genocide; nothing to disturb the public relations image of northwest California as an outdoor paradise and eco-tourist’s heaven. There are no official, civic memorials to the victims of mass injustice, such as the Memorial to the Murdered Jews of Europe in Berlin, Memory Park in Buenos Aires, or the African Burial Ground National Monument in New York; or educational centers devoted to learning about the motivation, psychology, and organization of perpetrators, such as Germany’s Topography of Terror.

California continues to be shaped, culturally and socially, by bitter legacies and divisions. Doing justice to the past means speaking the unspeakable, rehearsing the bad, making human-made tragedies a matter of public recognition, creating histories that speak to all the diverse populations of the region, and recognizing that the United States is not exceptional but one among many nations, that we too—just like a Germany, a Rwanda, a Cambodia—need to come to terms with our sorrowful past.

Tony Platt is a Distinguished Affiliated Scholar at the Center for the Study of Law and Society, University of California, Berkeley. He is the author of 10 books and more than 150 essays and articles on race, inequality, and social justice in American history, among them Grave Matters: Excavating California’s Buried Past; Bloodlines: Recovering Hitler’s Nuremberg Laws, From Patton’s Trophy to Public Memorial; and The Child Savers: The Invention of Delinquency, which was reissued as a fortieth-anniversary edition in 2009. He has also written for the Los Angeles Times, the San Francisco Chronicle, and the Guardian, among many other periodicals, and his commentaries have aired on National Public Radio.

This review of Benjamin Madley, An American Genocide: The United States and the California Indian Catastrophe, 1846-1873 (Yale University Press, 2016) was originally published in News From Native California 29, 4 (Summer 2016) and on the blog Tony Platt GoodToGo.