In August of 2017, I published an article in Wise Guys about Ukraine entitled “Understanding Ukraine: The Historical Context of Current Events.” Ukraine is in the news again as it struggles against Russia, once again exacerbating the tensions between Russia and the United States. On November 30, 2018, Vice News spent 12 minutes on the current situation in Crimea. (I have not seen such in depth hands-on reporting anywhere else in the news.) The most recent events that prompted Vice News to do this story was the Russians blockade of Ukrainian ships traveling under the recently completed Russian bridge that connects mainland Russia to Crimea and separates the Sea of Azov from the Black Sea. When three Ukrainian ships approached the bridge, Russia stole the ships and Ukraine responded by declaring martial law. 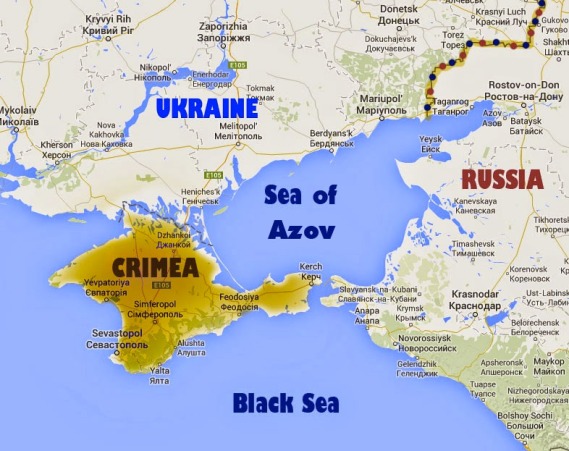 Vice News interviewed a Ukrainian nationalist in Kiev who declared Ukraine’s readiness to fight against Russia. Unstated was the fact that Ukraine is helpless against the mighty Russian nation unless it gets support from the United States or Europe. Europe is unlikely to do anything without the US, but it remains to be seen how far the US is willing to go. Donald Trump refused to meet with Vladimir Putin at the recent G20 summit in Argentina, but that doesn’t necessarily mean anything.

The Vice News story began by presenting the Russian side of the story. There are many Russians currently living in Crimea, and they are overjoyed that Crimea has been “restored” to the Russian “homeland.” How many of those Russians lived in Crimea prior to the Russian annexation in 2014 is unclear, but the historical precedence of Crimea being part of the Russian Empire is not debatable. The same was true for Ukraine itself. Russia did, after all, steal Ukraine from the Kingdom of Poland during the 17th century (as well as parts of Poland itself), and it stole Crimea from the Ottoman Empire during the 19th century. In fact, the stealing of Crimea in 2014 is the second time that Russia has failed to abide by a treaty concerning Crimea; the first time was after they lost the Crimean War in 1857.

During the Tsarist days and during the Soviet era, Crimea was a popular resort destination for wealthy Russians. Today it has resumed that role, but having constructed a bridge across the entrance to the Sea of Azov, Crimea is accessible to a lot more Russians than ever before. Furthermore, as Vice News showed, Putin has encouraged one of his oligarchs to invest heavily in developing the shoreline of Sevastopol, making it a much more attractive place for Russian immigration. Such investment is commendable. That kind of investment did not occur during the Soviet era. Nor did such investment occur after 1990 when Russian puppets were in control of the Kiev government.

These investments in Crimea are being done for military reasons because Russia does not have a good deep water port on the Black Sea without Crimea to use for military vessels or large vessels of any kind. Sevastopol in Crimea is a much more valuable port. Crimea is also a more strategic location for placing missiles that can threaten Europe or the Middle East. Moreover, the Ukraine needs passage from its ports on the Sea of Azov to the Black Sea. Consequently, the bridge between Russia and the Crimea is now being used for what Russia intended all along, namely, to squeeze Ukraine in order to wrestle away eastern Ukraine.

While Russia did supposedly win an election in Crimea in 2014, Vice News made it a point to interview some Ukrainians in Crimea. Although they aren’t suffering, they didn’t seemed too happy. It is unclear how many Ukrainian dissidents are now residents of Russian prisons or who were killed in 2014. Since dissidence is nowhere allowed in Russia, Ukrainians in Crimea are afraid to speak out. Without democracy it is impossible to know the will of the people who live there. But, Russia clearly wants to create a strong economy in Crimea that will discourage dissent and encourage Russian immigration. The longer that Crimea remains a part of Russia, the larger the Russian population will become. The larger that majority becomes, the greater Russia’s moral authority in Russia will become. The same logic has existed throughout the history of humankind. Might makes right.

However, the Russians have a big problem. As I pointed out in my 2017 article, Crimea depends on water flowing from a canal that connects the Dneiper River to Crimea. Ukraine has completely severed that water supply. Vice News showed that the canal is now at only 10 percent of capacity. Crimea is completely dependent on rainfall. Crimea without that canal would be like Los Angeles and San Francisco supporting a large population without water from the Sierra Nevada mountains or the Colorado River. Crimea can support a military base without a large water supply, but it cannot support a large population. How can Russia solve the water supply problem? By annexing Ukraine at least as far as the Dneipper River, which runs through Kiev. That is Putin’s plan and the Ukrainians know it. So, if the residents of Kiev want to remain independent of Russia, they have no choice but to fight to the death. Surely it would not be difficult for any country to blow up the bridge that now guards the entrance to the Sea of Azov. Putin is just waiting for that to happen in order to use it as a pretext for war.

Jeff Berger – Tech writer, public speaker, and engineer. He earned Masters degrees in statistics and operations research from the University of California, Berkeley, and was employed by IBM for more than 30 years. He developed an interest in history and economics during the 1990’s and now wonders if he might have chosen the wrong career.

One thought on “Russia and Ukraine: Ongoing Tensions”